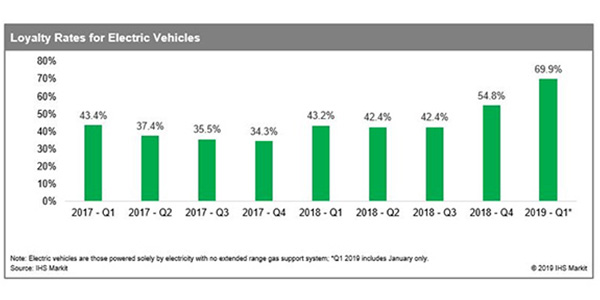 Combined with anticipated entries in the market from start-up automakers like Rivian, Lucid and SF Motors, as well as traditional manufacturers, U.S. consumers are expected to have substantially more choice on the dealership floor over the short-term.

The U.S. market for fully electric vehicles (EVs) has reached record volumes with 208,000 new registrations in 2018, according to recent analysis by IHS Markit. The loyalty rates of EV buyers also has continued to grow, the business intelligence firm reports.

New registrations for EVs during 2018 more than doubled year-over-year from just over 100,000 registrations, while EV market share also increased exponentially over the past three years. Perhaps not surprisingly, 59% of these vehicles were registered in California and the section 177 states,* which have all adopted the same vehicle emissions standards and have therefore been key markets for EVs as the OEMs have launched new models. California on its own accounted for nearly 46% (95,000) of new EV registrations in 2018, according to IHS analysis.

Loyalty rates for EVs also are on a growth trajectory, with nearly 55 percent of all new EV owners who returned to market during the fourth quarter of 2018 acquiring (purchasing or leasing) another EV. This is up from 42% in the prior quarter, according to IHS Markit. The trend continued in January, with nearly 70 percent of EV owners returning to market for a new EV during that month.

“EV loyalty rates have been steadily increasing since their introduction by OEMs. This increase over such a short timeframe demonstrates that a portion of the U.S. market is highly accepting of this new technology and has a growing comfort level with it,” said Tom Libby, loyalty principal at IHS Markit. “As more new models enter the market, we anticipate an even further increase in loyalty to these vehicles.”

In addition, IHS Markit forecasts a considerable increase in new fully-electric models offered in the U.S. market over the next decade, with over 350,000 new EVs to be sold in the U.S. in 2020, reflecting a 2% share of the total U.S. fleet. In 2025, that figure is expected to rise to more than 1.1 million vehicles sold or a 7% share, according to recent IHS Markit powertrain forecasts.

“A rapid increase in EV nameplates is the catalyst behind the projected growth throughout the next decade,” said Devin Lindsay, IHS Markit powertrain analyst. “While relatively successful models such as the Tesla Model 3 mature in the market, other traditional automakers will be rolling out not just one EV as we have seen in the past, but multiple models off dedicated EV platforms.”

Combined with anticipated entries in the market from start-up automakers like Rivian, Lucid and SF Motors, as well as traditional manufacturers, U.S. consumers are expected to have substantially more choice on the dealership floor over the short-term.

The greatest headwind for EV sales in the U.S. may soon be any elimination or delay to California’s Zero Emission Vehicles (ZEV) mandate by the federal government. The EPA has proposed to withdraw the waiver and therefore the ability for California and the section 177 states to regulate greenhouse gases separately from federal standards. If allowed to stand, this could have a considerable impact on the nation’s most popular BEV market, IHS Markit predicts.

As the EV market in the U.S. and other key regions continues to grow, one thing is clear – the internal combustion engine is not going away any time soon, with IHS Markit forecasters anticipating them to continue to dominate the global market until past 2030.

Advertisement
In this article:Electric Vehicles

US Electric Vehicle Loyalty And Volumes Reach Record Highs, According To IHS Market

DRIVE Expo 2020 Expected To Be Largest In Event History

Federated's Free Fuel Fridays Are Back
Connect with us

Shop Operations: Benefits Of Having A Green Auto Repair Shop

News: DRIVE Expo 2020 Expected To Be Largest In Event History 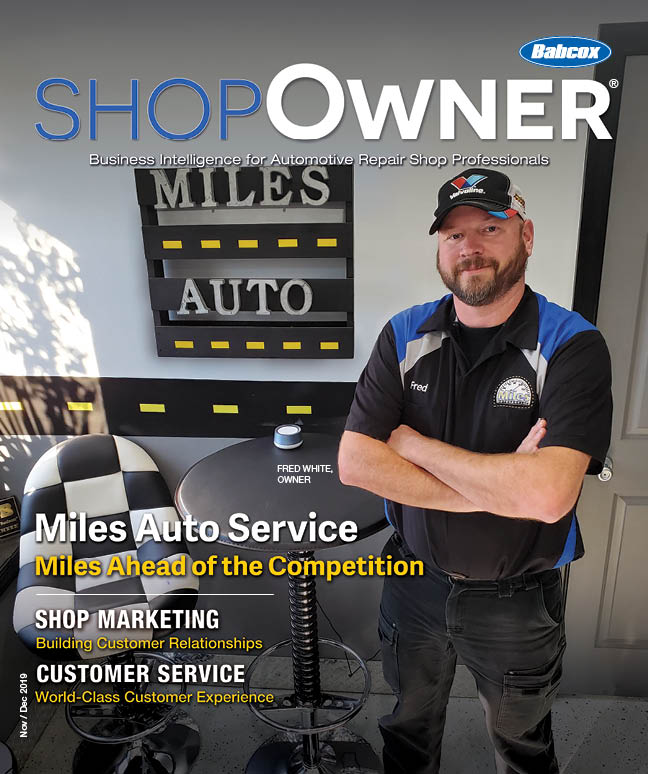