Pam Oakes has always had a love for cars, a passion handed down through the generations of her family. In fact, she’s a fourth-generation technician; her father, grandfather and even great-grandfather came before her and taught her everything they knew. 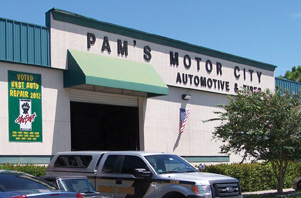 Pam Oakes has always had a love for cars, a passion handed down through the generations of her family. In fact, she’s a fourth-generation technician; her father, grandfather and even great-grandfather came before her and taught her everything they knew.

“My great-grandfather (and great-grandmother) taught me how to set a choke on a 1969 Plymouth,” she says, explaining that she didn’t have some of the barriers that other women interested in the automotive repair industry may have had. “My grandfather never said, ‘you’re female, so go inside and help your mother and grandmother with the dishes.’ There was none of that. It was always equal opportunity.” 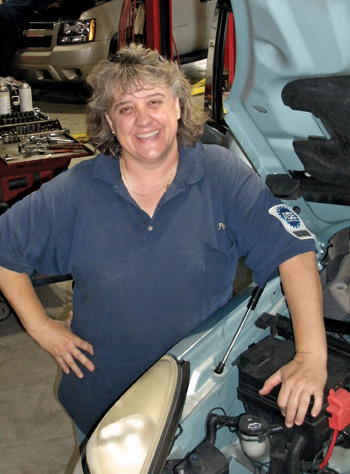 Her love for cars took a ­temporary backseat while she pursued a career in newspaper journalism, initially working as a reporter before becoming the editor of a local paper. But after seeing how other members of the media treated a grieving family after a multiple homicide, it made her rethink her profession. It only made sense to her to return to what she ­really loved.

“I called my dad and said ‘I’m done,’” she remembers. “I wanted to turn wrenches. It was back in the early ’90s, and the media was unfortunately turning into what it is today. They’re not reporting the news; they’re making the news for ratings. That was the turning point for me. I left the media, and I ­decided this is what I really want to do, what I truly love. I just followed my heart.”

Oakes worked for another shop for about a year and a half before realizing that she could run a repair business on her own. So, in 1995, Pam’s Motor City was established in Fort Myers, FL. The 12-bay shop handles repair and maintenance work, as well as tire installation, on both import and ­domestic vehicles.

Highly Skilled Team
The seven technicians at the shop are all ASE-certified, with three being Master Techs. Oakes prides herself on a cohesive team of employees who have worked together successfully for several years; one for 16, another for 15 and yet ­another for 14. 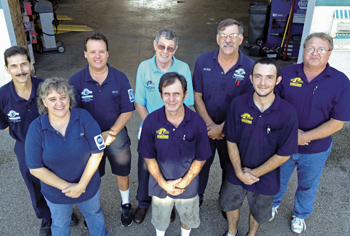 “I’ve had quite a few retire out of here — we have a real tight group,” she says. “If somebody doesn’t fit in, it’s not just me who decides, it’s the whole group that decides. We all have to work with each other and we take the cars very personally. We want everything right. If we get someone in and they don’t feel like that, they’re not part of the family — and we work together here as a family.”

Oakes says technicians take every advantage of training, especially when it’s offered locally, and is pleased with training offerings online.

“We jump right on every opportunity where training is offered locally,” she says. “We also do online training. We’re an ACDelco Blue Shop, and I really like their training programs. They’re very convenient.” 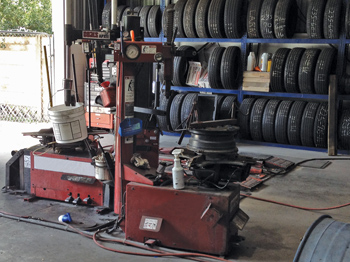 Unique Employee Perk
Pam’s Motor City techs also take ­advantage of a unique scheduling ­system where hours of operation are split into an A shift and a B shift. “Early risers” open the doors in the morning, Oakes says, while “night owls” close the doors for the night.

“It helps (deal) with the traffic,” she says. “We’re on one of the major rush-hour traffic routes, so they’re able to skirt around that since they can come in a little earlier or a little later after rush hour. It works with their schedule; if somebody wants to go a softball game in the evening with their child, then they’re here early. If someone’s a night owl, they’ll come in a little later. It works out for everybody — and for the customer as well.” 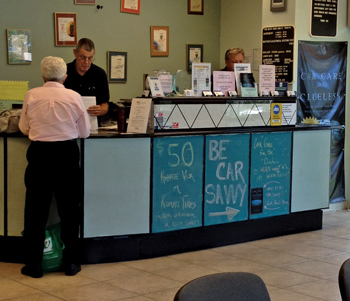 Also unique to Pam’s Motor City is a staff that can all work on cars. Even those in the traditional service writer role are ASE-certified, Oakes says, and “can go out and work on a vehicle.”

“The reason being, what better way to explain to a consumer what’s going on with their vehicle than by showing them with first-hand knowledge,” she says. “You can explain it to them in layman’s terms. We love to do show-and-tell here.

“You show them what a new brake pad looks like versus what they have on their vehicle; show them this is the industry standard. Then they can make an informed decision on what to do. That’s the way it should be.”

Oakes says each customer is also informed about how much the repair will cost — down to the penny — ­before it’s started.

“We don’t do any of those disposal fees either — those drive me nuts,” she says. “It’s one of my pet peeves, because the consumer needs to know what they’re paying for. When you have a line fee like that, it’s not right. I ran into somebody recently, and they have a shop up North. They said, well, everybody else is doing that, so I am, too. I said, but why? If everybody else jumps off a cliff, is it OK to do that? You have to do the right thing, not what everybody else is doing.” 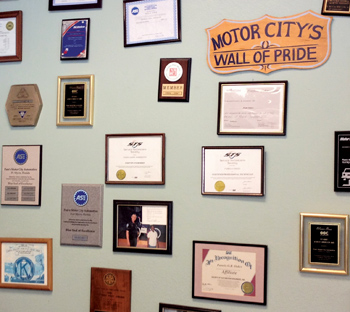 Catering to Female Customers
Oakes also seeks to help women become more confident in their knowledge of cars and vehicle repair by hosting periodic Women’s Car Care Clinics, where she hands out copies of her book, Car Care for the Clueless.

She also has a nationally broadcast (WGRN and webtalkradio.net), weekly radio show also called “Car Care for the Clueless,” discussing repair shop topics and answering listener questions submitted via e-mail.
Her soon-to-be-released second book is titled Car Care for the Clueless: Successful Used Car Buying 101.
Oakes also has participated in speaking engagements. Recently, she gave a presentation at the International Tire and Exhibition ­Conference (ITEC) in Cleveland, OH, on how to sell to/treat female vehicle owners.

Activities like these have helped Pam’s Motor City to receive 27 national, regional and local performance awards in the past 17 years. 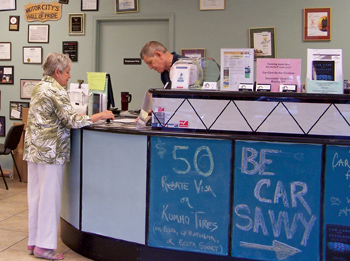 “Most of our new customers are from ‘word-of-mouth,’ which is a great compliment to all of us,” she says. “I do very little print/broadcast advertising, and yet, we were voted ‘Best Auto Repair’ in the 2012 News-Press Reader’s Poll. More than 110,000 readers voted in various categories. This was our 15th ‘best’ award for auto repair — 14 in a row.”

For Oakes, her success hasn’t been so much about navigating in a male-dominated industry, but about providing the best customer service possible, along with quality repairs.

“Whether I’m behind a desk or in the office, or in public or teaching a car care class to women, I look at ­myself not as a female in a male-dominated area,” she explains, “but as a professional explaining car care to the consumer.”

A combination of integrity, honesty, high-quality parts and workmanship will certainly take Pam’s Motor City well into the future.

Pam's Motor City Automotive: Love For Cars Is The Foundation For A Successful, Female-Owned Repair Shop