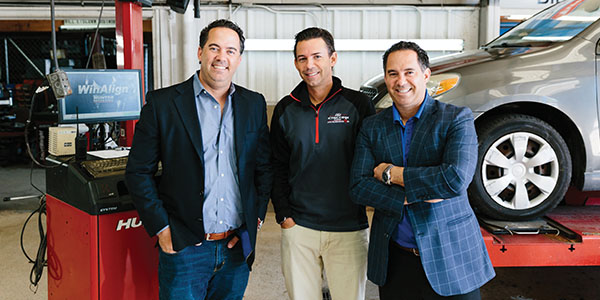 What do you get when three third-generation shop owners come together to run a business? You get the Etscorn brothers and their three family-owned and operated shops, all operating under the Bill Etscorn and Sons Auto and Collision Centers’ umbrella.

What do you get when three third-generation shop owners come together to run a business? You get the Etscorn brothers and their three family-owned and operated shops, all operating under the Bill Etscorn and Sons Auto and Collision Centers‘ umbrella.

While other family-owned businesses may not survive because of internal conflicts, Etscorn shops have been able to remain successful over the years because each co-owner has a different job.

“The fact that we’ve all set our goals, our visions and we each have our own responsibilities — has been a big key,” says Bryan Etscorn, CEO and co-owner. 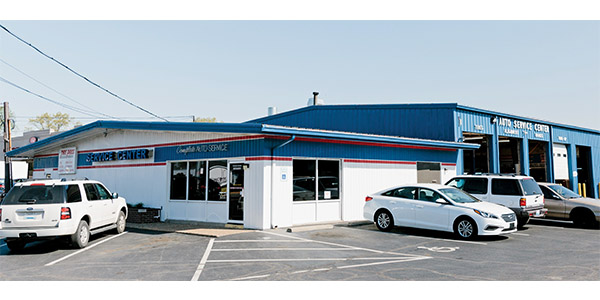 Bryan says that one of the perks of operating as a family business is that it allows him and his brothers, David, CFO, and Brent, COO, to showcase their dedication to their customers and create long-lasting relationships with them.

“What makes us different from our competition is how we handle problems,” Bryan says. “You can’t walk into a big, multi-shop corporation and ask for the owner.”

Meanwhile, at the Etscorn shops, customers can walk in and more likely than not, get to speak to Bryan, Brent or David to answer any questions they might have. 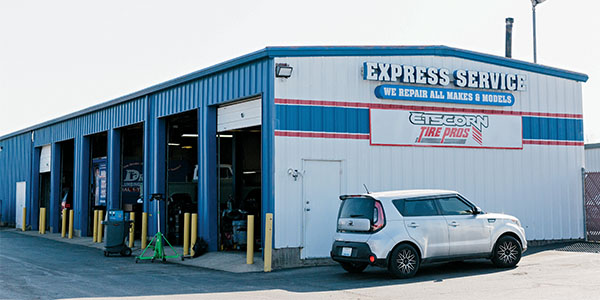 Located in Louisville, KY, the three locations have a combined total of 71 bays and serve the community’s auto repair, tire and collision needs. The mechanical repair shop, Etscorn Auto Service, is a Bumper to Bumper Certified Service Center and a customer of Moog Louisville Warehouse.

Shop History
The shop has a rich history through its three generations of owners. It all started in 1947 when the brothers’ grandfather, Bill Etscorn Sr., opened up a Marathon Gas Station, and over the next two generations, helped evolve the company into what it is today. In the 1950s, the shop was the top tire, battery and accessory dealer for Marathon Oil Company.

Then in 1960, Bill was asked to become a Phillips 66 dealer, so he accepted and moved the shop across town. His son, Bill Jr., later took over the shop after returning from the Vietnam War.

After many successful years working hand in hand with his father, Bill Jr. bought the company from his dad in 1979. That same year, the company moved once again and opened what is today their auto service center. Five years later, the first collision center opened right next door.
Bill Jr.’s three sons had always worked in the shop when they were little and it grew on them.

After the three brothers graduated from college they began working full time in the shop, keeping with the family business. In 2007, the company added a second body shop across town and grew to three shops total.

In David’s mind, to run a successful, modern-day shop, you must always keep an open mind and listen to your employees, while also staying educated on industry trends and preparing for change. 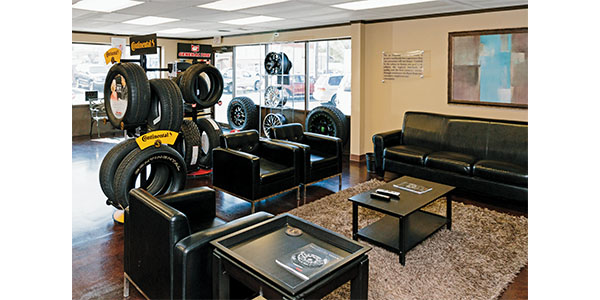 Customer Care
One of the ways the trio wants to continue their family’s legacy is through their customer care — even after the service is complete.
“Our managers do call returns,” Bryan says. “Even when customers are gone and have already paid their bills, our goal is to continue to reach out and make sure that they’re satisfied. I always tell my customers — when you have a problem, we have a problem, and we’re going to handle it.”

While the shop does a good deal of advertising, most of the shop’s business still comes from word of mouth and the reputation the shop has built in the community over the generations.

“We advertise on TV, radio and social media, but we’re also heavily involved in our community,” Brent says. 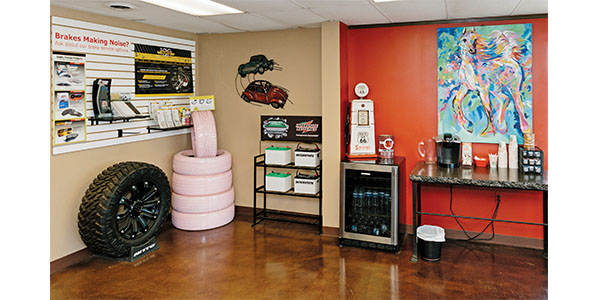 One of the ways Etscorn shops stay involved is through a charity called Lemonade for Life, which was co-founded by the Etscorn family. The non-profit provides financial support for families of special needs children; with a focus on those who are living with type 1 diabetes and all forms of pediatric cancers.

“We’ve always enjoyed giving back to the community, but we were really looking for a more direct way to help people out and make a difference,” Brent says.

In addition to community engagement, Brent also stresses the importance for shops to create a strong presence online to help advertise and market your business. Etscorn shops have a dedicated, full-time marketing employee who’s devoted to this role, and Brent says it’s worked out well having a specific person handle everything, instead of working with a different account manager for each type of digital marketing.

“We were doing it [digital marketing] ourselves and we couldn’t keep up,” Brent says. “We wanted to be consistent with what we did.” 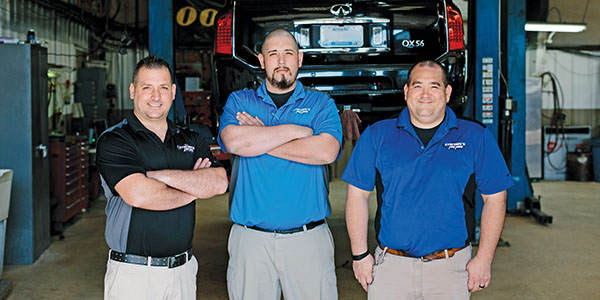 In addition, the auto service center joined the Tire Pro franchise in 2011 to achieve more marketing and buying power. Bryan says the partnership meant stronger product warranties and discounted products, as well as the ability to keep their independent name.

The auto service center specializes in diagnostics, but also does everything from tires and brakes, to A/C repair and shocks and struts. The shops are certified by GM, Nissan, Ford, Honda, Buick, Jeep, Dodge and Hyundai and employ ASE-certified technicians.

“We invest a lot of money and training into each employee to make sure they understand the latest technology and advances in the car repair process,” says David.

To keep their 39 technicians knowledgeable about how to make all of these repairs, David and his brothers advocate for continued education though in-house training and classes offered by their vendors and local companies.

“Cars are always changing and it’s already tough to keep up with all the new technology as it is.” David says. “So, for us to continue to work on all these different types of models, continued education is not an option, it’s a necessity.” 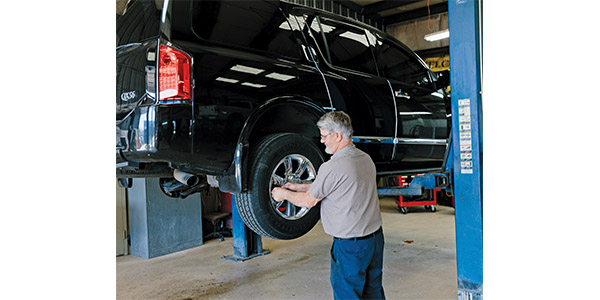 Doug Dearmond, a member of the Etscorn shop team for 30 years.

Employees
When hiring techs, not only are the brothers looking for knowledgeable technicians, but for ones who are motivated and love what they do.
“I want family-oriented guys,” Bryan says, “They have reasons to work out with us because they have a family to support.”

Bryan says that at Etscorn shops, even though they’re a small business, they care about their employees’ families and want employees to enjoy their time off. So, they offer paid vacation time, health insurance and a 401(k) plan for their employees.

Moving forward, the brothers hope to add other benefits to show their employees that the company cares and encourage them to stay with Etscorn shops. Benefits like bigger break rooms, workout rooms and showers within the shop for his employees — things that the newer collision center already has in place.

“I think a good work atmosphere means you treat people like people and not just employees,” Brent says, “We live in a stressful world anyway, so coming to work and enjoying who you work for and what you’re doing is a big key to building a good environment in our industry, that’s for sure.” 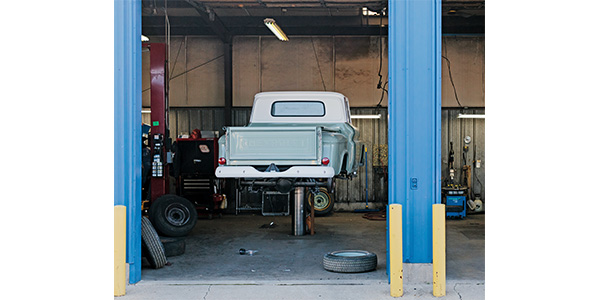 Another way Etscorn shops attract techs is through local high school and vocational programs. Bryan says the company makes outreach efforts at least once a year to see if any upperclassmen are interested in shadowing a shop employee, or if they can help any of them find a job when they get out of school.

“By getting in there early and showing them that we’re here and they can work for us is a big help,” Bryan says.

Talking to them early also shows students that shops aren’t what they once were, and that the messy auto and body shops have been replaced by clean facilities with a whole new image.

In the future, the brothers hope to expand with a second auto service center, while continuing to build that new image of what a modern-day shop should look like. Because, as Bryan says: “If you take care of the business, the business will take care of you.”

Advertisement
In this article:Bill Etscorn and Sons Auto and Collision Centers

Miles Auto Service: Miles Ahead Of The Competition

News: Study: Many American Car Buyers Not Ready To Pay For eMobility 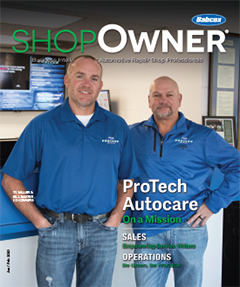