Most people don’t become automotive repair shop owners overnight; they may start out as a technician who agrees to slowly take over a retiring owner’s business, or open their own shop and steadily build a customer base. When the first option fell into Larry Moore’s lap, he jumped at the chance – with some mixed results in the beginning. 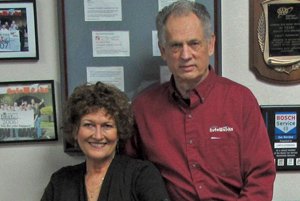 Most people don’t become automotive repair shop owners overnight; they may start out as a technician who agrees to slowly take over a retiring owner’s business, or open their own shop and steadily build a customer base. When the first option fell into Larry Moore’s lap, he jumped at the chance — with some mixed results in the beginning.

“It was by accident,” says Moore, who owns Larry’s ­AutoWorks in Mountain View, CA, along with his wife, Laurie, and daughter, Tiffany Carter, of his start in the industry. “I was actually working my way through college building Volks-wagen engines, because I was a cash-poor student who kept blowing up my VW engines. At that time, nobody really knew anything about Volkswagens, but I found this little shop in the middle of nowhere with this old guy who knew how to build Volkswagen motors. I learned from him and then he paid me to start building ­motors.

“He started a big operation down in LA to compete with a major engine remanufacturer, and they had a little problem with one piece of equipment, and they realized they were going to get back all 1,000 engines they had sold,” Moore explains. “So he called me one day and I was finishing up school, and he said ‘how would you like to buy the shop?’ I said, ‘Gosh, I don’t have any money.’ He said, ‘I’ll make it ­really cheap.’ So, I scraped together money overnight from friends, family and acquaintances, and I met him at the airport the next day and bought the shop. He was leaving town, and was heading up to Alaska. Now what I found out later was that he had hocked the shop to the hilt, so a lot of the stuff I had thought I bought, other people thought they owned. But it worked out in the long run.” 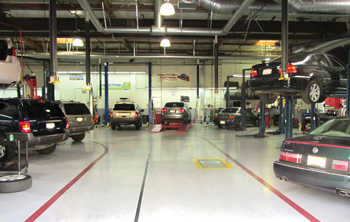 The Need for Networking
But, Moore says, it also wasn’t before making many mistakes along the way — including hiring a guy with a heavy German accent thinking he would know how to work on German cars. It wasn’t the case. When Moore got his start in the business 40 years ago though, the coaches and trainers there are today didn’t exist.

“There were absolutely zero coaching companies that I could find for mechanical repair,” he says. “There were one or two for body shops, so I attended those, but they really didn’t tell me what I needed to know about running a mechanical shop. So, most of the information I got in the early days really came from meeting other shop owners and having them be willing to talk to me about what they were and were not doing. 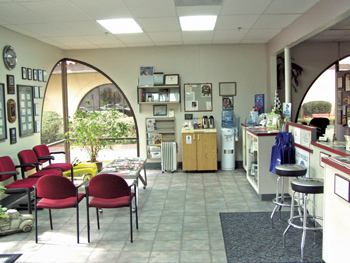 “I was also very lucky early on in that I was involved with Michael Gerber who wrote the E-Myth, a wonderful book that every business owner should read. I was lucky enough that he was local, and I was one of his students for several years. So I learned about business there, and I learned about the auto business from other shop owners.”

Moore also was lucky enough to be ­involved in one of the first training groups on the scene in his area, Educational Seminars Institute, which was started by another shop owner who realized that people didn’t know how to properly run their shops. He also joined the Automotive Service Councils of California (ASCCA) 28 years ago, and he credits that organization with helping him develop into the businessman he is today. He’s even a past state president. 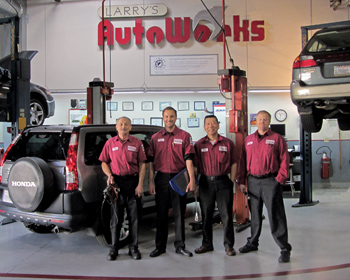 “I literally would not be in business if I had not joined ASCCA and gotten to know other automotive business owners,” he says. “Their input over the years has allowed me to adjust my business and stay profitable. Being a member of local business groups has helped me stay on top of what is going on locally and also make ­adjustments. Business is constantly changing, so it’s important to stay in touch with others in the same boat. Some of my most effective business practices have come from discussions with other business owners.”

Change is Constant
To be an effective shop owner today, Moore continues, you have to be willing to change. From cars that are becoming more complex, to advertising moving to the web, to customers ­becoming even more discerning, change in the automotive industry is the only constant. 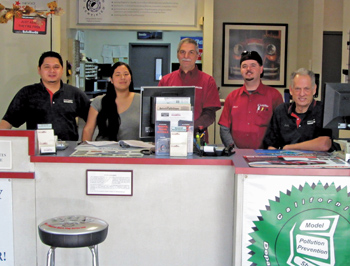 “The cars are changing so fast, and they’re so complex,” he says. “When I got into the business, I learned some of it just because we were doing it. It was mechanical, and if you broke something taking it apart, you realized, I can’t take it apart that way next time. You figured out how it worked and next time you fixed it right. With electronics, you can’t do that, especially on a customer’s car. So, really, the only way to learn — and to make money at it — is that you have to be able to diagnose it, repair it and return it to the customer in a timely fashion. Training is the key to that.”

Moore says all of his technicians attend technical training, oftentimes put on by a local parts house, and sometimes by a national training company. Larry’s AutoWorks is a certified Bosch Car Care Center, so his staff also takes advantage of that training. Also critical to that formula for success is shop appearance, both of the facility and staff.

First Impressions
“I learned early on that the simple difference in what I wore at the front counter made a difference in how people responded to me,” he advises. “My original customers were Volkswagen customers, and they all had long hair, beards and were hippies, and therefore I was a hippie. They trusted me because I was like them.” As Moore’s demographic began to shift, he realized that he had been working for a bunch of people with little money, and that the people he wanted to work for had more money to fix their cars. So he changed his appearance and immediately saw an ­improvement in his success. 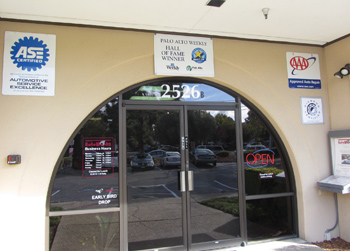 “We started changing the ­appearance of the shop, and with the input from my wife and daughter, and some of our employees and customers, we began to make the shop nicer and nicer to the point where we feel very proud about how the place looks. We get comments all the time that this doesn’t look like a shop, it doesn’t smell like a shop and everything is well lit. More than 60% of our customers are female, and I think they are a more discerning buyer. They look at how the place looks and use that as an indicator of whether or not it’s a place they want to bring their car.”

Moore also acquiesces that while he has a degree in marketing, the rapid shift to the ­Internet in recent years had him baffled at first.

“At one time, you advertised in the local newspaper,” he says, “but now most people get their news from their iPhone or their Droid. That part of the business has changed more than anything else. I was a little cocky for a few years, because any time I wanted to increase business, I knew which key to turn. But about five years ago, I realized I got left in the dust.” 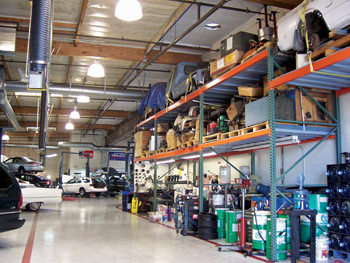 To remedy that, Moore turned to a trusted partner, ­AutoVitals, to help ­develop and run what is now a successful on-line marketing campaign, which comes in handy in the tech-heavy area of the country in which the shop is located. With companies like Google and LinkedIn just down the street, Moore says he had to become more tech-savvy to meet the needs of his mobile customer base.

“What I’ve realized is that I have to constantly understand that things are going to change and that I have to change,” he ­explains. “I used to think I’ve been in the business for 30 years, I’ve got this nailed. What I’m realizing is that because things are changing so quickly, if I don’t constantly try to improve something all the time and learn a little more, before long I’m going to be standing there wondering what ­happened to the business.

“That’s why the techs have to go to school, it’s why I have to go to classes, and it’s why I meet with other shop owners as a part of 20 Groups. I’m part of different things that allow me to keep my finger on the pulse of the industry.”

Add to that the use of QuickTrac software to attain a real-time view of key business indicators, and it’s easy to see how Larry’s AutoWorks will continue successfully into the future.