A little planning goes a long way, or, in the case of Voit Ritch, a lot of planning results in a new landmark building that can’t help but be noticed. To be exact, the all-new Autowerkes Maine in Freeport took two-plus years of planning and the help of staff and current customers to make the project all come together, culminating in a Grand Opening celebration on Aug. 25, 2012.

A little planning goes a long way, or, in the case of Voit Ritch, a lot of planning results in a new landmark building that can’t help but be noticed. To be exact, the all-new Autowerkes Maine in Freeport took two-plus years of planning and the help of staff and current customers to make the project all come together, culminating in a Grand Opening celebration on Aug. 25, 2012.

“I wanted a landmark building, I didn’t want just a big box,” Voit says. “This town won’t allow you to build something that looks like a garage. I figured this was an opportunity to make something unique.”

Voit says shop space has more than tripled, ­go-ing from 2,400 sq.-ft. in his leased building across the street, to 8,500 sq.-ft. Plus, there’s another 5,500 sq.-ft. that allows for more space for the customer waiting area, offices and parts. The shop now boasts eight bays with lifts, one alignment bay and three flat bays as well. 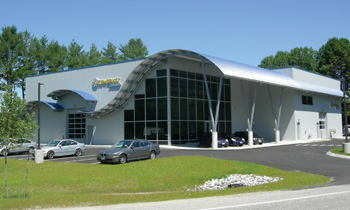 “We were in leased space that I knew was too small for us,” says Voit, who’s been in business for the past 27 years. “So I had to time it to when our lease was going to run out. I acquired the land two years ago, and I also had to get my concept to fit the lot. I visited shops all over the country to find out what I liked and what I didn’t like, and what would work and wouldn’t work. I was really trying to build the ­ultimate shop.”

And build the ultimate shop he did. From the distinctive blue-trimmed exterior, to the grand front entrance made of all glass, Voit thought of every detail.

“We also brought architectural elements from the outside in,” he explains. “Our service counter is a long, curved counter with similar metal and the same color of blue. As you walk through the building, it’s all tied together. The building was built for future use as well; it could be a medical facility, retail facility or office facility. The building was built to be unlike any other shop.” 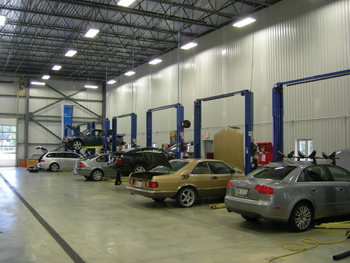 Voit himself served as the general contractor for the project, and he did a lot of the engineering, design and layout, and he also reached out to long-time customers for their ­expertise.

“Luckily, I have a very good staff that allowed me to spend 100 percent of my time doing that during the construction phase,” Voit says. “A big benefit was we basically built right across the street. There’s just a couple hundred yards between our old facility and the new facility, so I could be available if needed.

“It was my original concept, but one thing that was important to me was to involve people who had been doing business with me,” he continues. “So the architect has been a customer for 27 years, and I was able to give back to him for all he’s given to us. He was responsible for really making the architecture pop and making it fit the size of the structure we were building.

“The legal work was done by another customer of many years through multiple cars. The local contractors had done business with us as well. They are people who care to do the job right because they’re going to be coming to you for service when it’s done.” 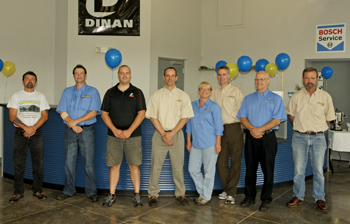 Building for the Future
Voit made sure that the new building would ­require little maintenance, and that it would be as energy efficient as possible. He reasoned that it would make no sense to have any high-dollar repairs just a few years down the road.

The additional floor space of the new building also allows for two lifts per technician for a total of eight, as well as plenty of space for equipment. Every effort was made to outfit each service bay with everything easily accessible. Says Voit, “We also now have enough room for support staff to keep things clean and organized.”

“I’m very conservative, so anything that saves a buck,” he ­explains. “I was spending so much on the facility, and I did not want to have any maintenance to speak of — no projects five years down the road.
“This building was built to virtually last forever with little more than a power washing. It was over-engineered, over-built, over-insulated. Every system in it — the air conditioning, the heating, the garage doors, the lighting — is the best money can buy.” 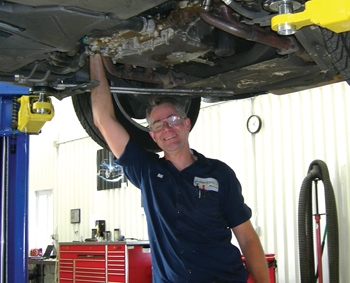 To top it off, the architecture’s not just for looks, it’s actually functional, Voit says. The covered canopy area ­allows customers to pick up their cars out of the elements, and loaners are kept under the canopy as well so ­customers pick them up in the same manner.

“We’re in an area where it snows, it rains, there’s bright sun,” Voit explains, “so when they pick up their cars they’re washed and underneath the cover. They can walk out of our front door directly to their car in the shade — no snow, no rain.”

Getting the Word Out
Voit says customer reaction to the new facility has been overwhelmingly positive — and growing. Prior to the move, Voit says he made a concerted effort through various advertising initiatives to grow the business to fit a new, larger building, and the shop was easily gaining one to two new customers a day. Since the move, that can happen in an hour. 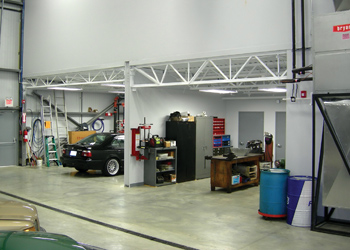 “We did a lot of branding, as well as direct advertising,” he explains. “We did glossy magazines, local papers, radio, TV — things to make our logo recognizable. We went way overboard on advertising probably for about four years. We grew 25 percent one year; 20 percent the year before that and we got to the point where we couldn’t fit anything more through the doors of the shop we were in. Now, we seem to be easily gaining more than the two new ­customers a day; sometimes that happens in an hour.”

Voit recognizes that customers expect technicians to be capable and efficient. And with the complication and expense of both the cars and the equipment that it takes today to ­repair them, he says, “that shops now need to be far better equipped to meet this expectation. 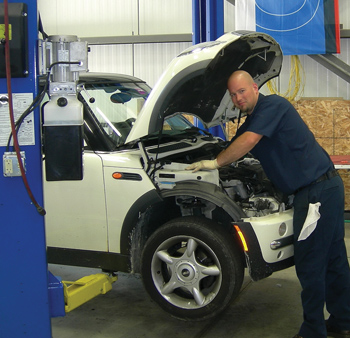 “Shops need to be large enough to amortize the high cost of this equipment and have good infrastructure to make the best use of it,” he says. “Above all, there needs to be quality people who will utilize all this to deliver results.”

In-House Training Advantage
Another feature of the new shop will help staff meet the expectations of Autowerkes Maine customers. A 30-person training room will allow Voit to bring trainers in-house rather than paying for staff to go to them.

“Historically, we have regularly sent our people to training related to their job description,” he says. “This could be from various suppliers, industry organizations or professional trainers on specific topics. We are a Bosch Car Service center, and we’re ­involved with ASA, BIMRS and a number of other recognized groups. Now, we’ll be able to bring trainers and training programs directly to the shop. That will allow all my staff to be involved. We’ll be able to learn using our equipment, on our cars and in our own facility. I feel this will maximize the benefit and at a similar expense.” 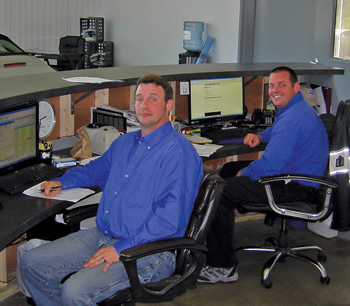 Voit says the new building is a ­culmination of years of ­success that is a result of the people who surround him — from capable staff to industry groups, such as ASA and BIMRS, to the Service Center Scholars 20 Group he’s been a part of for the past five years.

“Even the best shops and staff need support,” he says. “We need to have reliable suppliers, sufficient professional services and avenues for technical information. Beyond that, however, we need peer groups that connect us. Involvement in numerous groups of this nature has been compulsory for me in the growth of my business.”

That, Voit says, will allow him to continue to adapt and be successful in the ever-changing automotive repair landscape.